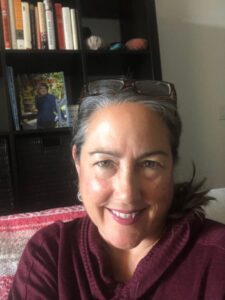 Shelley Burbank is a mystery and women’s fiction author based in Maine and San Diego, California. Her short fiction has been published in the confession market and literary magazines, and she worked as a journalist for a weekly newspaper for many years. Her most recent short fiction can be found in San Diego Woman Magazine.

Shelley Burbank was born and raised in Maine. She attended Bangor Christian High School and then earned a bachelor’s degree in Secondary English Education from the University of Maine at Farmington. While at UMF, she took an introduction to fiction writing course and was a member of the UMF Literary Guild. Her short story “The Hat” was included in Thunder Eggs: The Best of Student Writing from Across the Curriculum, and several short stories and poems appeared in student literary magazines.

Shelley married her college sweetheart soon after graduation, and she and her husband and daughter settled down in Limerick, Maine where she continued to write short stories and novels, eventually gaining publication in the national magazines True Story, True Confessions, and True Love and in literary magazines The Maine Review and The Katherine Press Review. She was also a contributing writer to her community’s weekly newspaper, The Waterboro Reporter, for many years, focusing on stories about local artists and entrepreneurs.

In 2019, she co-wrote a nonfiction memoir, THE LAST TEN DAYS: Academia, Dementia, and the Choice to Die by Martha Risberg Brosio. The book was traditionally published by Myers Education Press and received several good reviews in the academic sphere.

When she’s not reading or writing, Shelley enjoys knitting, binge-watching Sex and the City, Buffy the Vampire Slayer, and Gilmore Girls, hiking or walking, and spending time with friends and family. She belongs to a fabulous writing group, The Advance Copies, in Limerick, and is passionate about literacy, women’s issues, and the arts. She keeps a personal journal to stay sane, considers coffee a necessity for a life well-lived, and can’t seem to Marie Kondo her book collection despite the best of intentions.

Want to know more? Sign up for the A Good Life in Crazy Times Newsletter and check out her writing style on her blog and published work page.

Find me on my socials