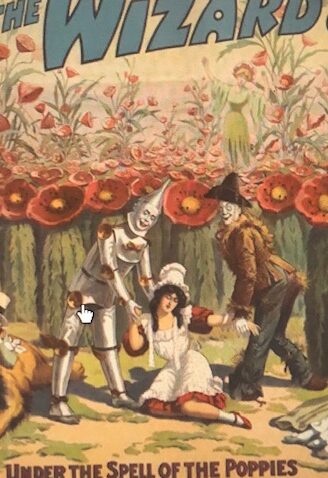 Dorothy had her slippers. I have my Chromebook. Lately, I’ve been immersed in the Land of Oz. Let me share a little bit of my journey with you.

I don’t know about other writers, but if I spend too much time researching, reading, recharging, or goofing off rather than tapping away at my keyboard doing actual writing, I get as agitated and depressed as a Kansas farm girl watching her balloon-ride home drift away into the heavens.

This is my state of mind these days. I recognize the writing-withdrawal symptoms: Boredom with any and all books in my vicinity. Inability to concentrate on said books even when I’m determined to get down to business and enjoy some reading, darnit. Staring into space and fidgeting while stubbornly refusing to acknowledge  the tell-tale buildup of pressure somewhere in the back of my brain. A tendency to binge-watch soapy tv shows late into the night (I’m hooked on Grey’s Anatomy right now, Lord help me. 18 seasons!) and then sleeping fitfully and dreaming the most fantastical and exhausting dreams.

Despite the increasing pressure, I try to ignore these symptoms because to recognize them would mean doing something I both crave and wish to avoid.

Maybe it’s just me, but writing is something so ingrained in my being that if I avoid it too long I get grumpy. I flit around from activity to activity, starting one thing (like putting the clean dishes away) and then  dropping that mid-way to start something else (like spray down the butter-compartment in the refrigerator and then eat a piece of American cheese while standing at the open refrigerator door and staring at its contents and wondering what I should make for dinner…nine hours from now).

And then I begin to make epic entries in my journal and short-story-length emails and, well, rambling blog posts like these. My brain needs to write. This doesn’t make me special or anything. Maybe it’s an addiction? Maybe it’s a calling? Either way, it doesn’t make me a literary genius or anything. It just means I have a mental/emotional itch that needs scratching. Badly.

Why have I allowed myself to get into this state? Well, first of all, I started and then put aside a novel when I left the online writing platform I’d called my writing home since 2014. I liked the story, but I wasn’t sure how to continue. I decided, instead, to concentrate on freelance journalism. I wrote a few articles (see my recent clips page) and placed some flash fiction into a women’s magazine.

Meanwhile, an idea for a big, epic, multi-decade novel blossomed, and so I figured I’d spend a long time researching what I needed to know before attempting such a huge project. The short freelance work would keep me busy while I worked on the Big Epic Novel. Fine and dandy.

But then I thought I should submit my first Olivia Lively mystery, DISGUISED, to Encircle Publications before tucking it away for good after its long, strange journey on Wattpad. Just in case, I thought. I’ll give it one chance at the one publishing company in which I’m interested, just in case.

Miraculously, Encircle accepted the book for publication, and it will be out around March 2023 with a new title! (I’ll post the video announcement at the end of this essay for those who haven’t seen it elsewhere. My newsletter subscribers got to see/hear it first.)

Anyway, as delicious as this development is, it’s also forced me to a sort of writerly existential crisis. The book is a female private detective mystery set in Portland, Maine. I never really considered myself a mystery writer, despite the fact that I wrote a second but unrelated mystery after this one. And then I wrote a women’s fiction with a sort of thriller vibe. And even the rom-com that I abandoned ended up with a crime element sneaking into it unplanned.

It’s slowly dawning on me that, ahem, I might actually BE a mystery writer. Not only that, with my first novel coming out, I might be smart to write a sequel that I’m sure legions of fans will be clamoring for after they finish the first Olivia Lively Mystery.

In other words, I realized I didn’t have time to dawdle on the Big Epic Novel for who knows how many years it would take to finish it. I needed to get another Liv story started, but I didn’t have any ideas, or any good ideas, or ideas that excited me.

Then serendipity struck. I realized all the research I’d done for that Big Epic Novel could be used in a new Olivia Lively Mystery.

I’ve been learning everything I can about Old Hollywood, the making of The Wizard of Oz, and Ruby Slipper lore. My main character in the epic was to (maybe still will) have been a wardrobe girl at MGM when Oz was filmed. “Julia Silver” would (will) leave MGM and become a clothing designer and build her company while juggling marriage, motherhood, and tragedies. Good, right? But Julia’s story will have to wait because Olivia Lively is going to be searching for a stolen Hollywood artifact, and I’m going to get to use a bunch of this research in a mystery novel. And maybe Juila has something to do with it. Still trying to pick that nugget out of the depths of my subconscious. Stay tuned.

The whole body of Wizard of Oz lore fascinates me, not least because L. Frank  Baum stayed often at the Hotel Del Coronado here in San Diego. From 1904-1010, the Oz author resided at the hotel for a few months each year and wrote three Oz books during that time: Dorothy and the Wizard of Oz, The Road to Oz, and The Emerald City.

The history of The Wizard of Oz as first a stage production and then the movie is fascinating. How many people even know that it was a theater musical first? The show premiered in June 1902 at the Chicago Grand Opera House and eventually ended up on Broadway. You can find out more on Wikipedia.

The image at the top of this post is a detail from poster art designed to illustrate the Act 1 finale where Dorothy falls asleep in the poppy fields. What fascinates me about this poster, is the artist chose to paint Dorothy’s shoes red. In the book and in the musical, the shoes are silver. When MGM (screenwriter Noel Langley is said to have come up with the idea) thought about Technicolor, they decided to use sparkly red shoes, and a legendary American symbol was born. Isn’t it interesting that the poster artist thought it up first?

While researching, I discovered that there is an Oz museum in a Kansas town called Wamego. The museum “showcases over 100 years of Oz history” and I HAVE TO VISIT!

Turns out, Wamego is just a 12-minute shot from I-70, one of the routes Hubby and I travel when going back and forth to Maine on our X-Country Roadsprints. I am going to beg and plead that we stop in Kansas on our next jaunt across the country in a few weeks. What’s the sense of doing all this travel if we aren’t going to actually stop and smell the, uh, poppies?

My brain is zinging with ideas for this new mystery, and so I’m taking the extraneous research books back to the library today. I have the story outlined in very broad strokes. I know how Liv gets involved. I know the setting. I know the twists and turns she’ll take while tracking down the truth. I don’t yet know who needs to be brought to justice. Maybe that’s half the fun.

I’m heading Over the Rainbow and  down the Yellow Brick Road to Oz, and I couldn’t be happier. I know this is going to be a trip and a half. Follow along here on the blog. Let’s travel together!

Watch my video where I share all the deets about how I got my first traditional book deal.

That’s all for this week. Check in for more regular updates. Next time, I’m going to show you the awesome Oz earrings my friend Wendy gave me.

Why more posts here? I’m finding my social media usage creeping up again, and I think the reason has to do with the “not writing itch” and also my urge to connect, connect, connect. So, I’m going to work on creating a habit of posting here instead. I’ve tried this before, but you know it doesn’t hurt to begin again as many times as it takes to break that social media habit. It’s not easy!

To facilitate this, I watched a marketing and promotion webinar based on NOT using social media earlier this week. I learned that Instagram now favors “reels” over regular posts, which apparently everyone found out about at the same time because my Insta feed is now 90% short, quirky “tik-tol-like” videos. Users are so savvy,they jump on every algorithm change like cockroaches on crumbs. But then of course it defeats the purpose. No one stands out when everyone is doing the same thing!

Can’t we creatives find a better way to share our news? Promote our work? I’d love to discuss this. Maybe I can put a panel together on a video somehow. Hmmmm.

What are your favorite memories related to The Wizard of Oz? I love your comments and questions. And if you really enjoyed this post, please share it with your friends.

Part I: In The New Year

Part II: In The New Year