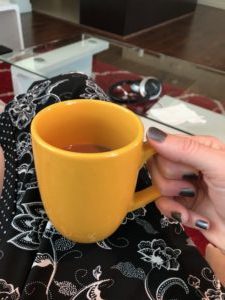 Coffee in the Morning

Is the journey really the point, or are we just making ourselves feel better about our failures when we invoke the journey? Is it better to aim high and land somewhere south of the benchmark? Or is it better to aim low at first and then set our sights a little bit higher the next time?

And always, always the question: does any of this really matter at the end of the day, week, month, lifetime?

I recently ran across a video of a little girl, maybe three years old who was attempting to nail a standing jump onto a plastic step about a foot away from her. Jump. Fall. Jump. Tumble. Jump. Slip. Over and over and over. A father-figure/coach enters the picture, gives her encouragement. Her eyes narrow, her mouth sets, her limbs tense as she stares at the step. It seems she is visualizing herself making that jump. She waits, waits, waits…then bursts up and onto the step, nailing the landing. She pumps her fists and screams, “Yah!” and celebrates with her mentor. It was a joyous moment to behold.

What did this girl learn from her experience? Confidence, I imagine. Belief in herself and her abilities. Perseverance, for sure, and trust that others also want us to succeed. Couldn’t we all use a little bit of this in our lives?

But what if she had failed…that day and for many days after? And how many days prior to this moment had she been working toward her goal? We don’t know from the video. What if she’d never succeeded in hitting that benchmark?

So far, all I’ve come up with are questions. Let’s see if we can find some answers.

One: Wu Wei Is Our Friend

Quite a few years ago, I stumbled across Taoism, not as a religion but as a philosophy, and when I keep these principles in mind, I find myself having a much more friendly relationship with success.

Wu Wei is a concept that was developed by Chinese philosophers centuries ago. Wu Wei means “doing by not-doing.” Taoism recognizes that everything in the world has its own nature and rhythms, including ourselves, and to work against these natural forces is a waste of energy. For example, wishing you could go back in time and make a different decision is futile. We can’t go back in time. Why expend one bit of your energy on useless, wishful regret? However, reviewing the circumstances and deciding to make a different choice the next time? That is going with the flow of the universe. Already you feel more empowered saying, “I can’t change what’s in the past, but I can do better in the future.”

Striving–actively seeking success–is not the Wu Wei way. Neither is giving up and doing nothing. To me, Wu Wei is about going with the flow toward your goal and making adjustments along the way.

In my own life, my goal is to make a modest living by writing. Striving for “success” as a writer is infinitely more stressful to me than simply writing, practicing my craft, and putting my work out into the universe whether on this blog, on Wattpad or other online publishing sites, ghostwriting, or submitting to magazines and publishers. When I’m mindful of this situation, I realize that by writing every day, participating in writing groups in a non-competitive manner, reading good books in order to learn new techniques, and sharing and submitting my work, I am moving with life toward my goal rather than fighting against it by insisting on success.

Of course, there are times when I forget this and get discouraged. I push too hard and become stressed and anxious. In striving, I become worried about success and failure, and this negatively impacts the quality of my writing–not to mention my inner peace and enjoyment of life and my work. Stress leads to imbalance in the mind and body, so even if all that striving somehow “worked,” the dark side of that success might cast a deep shadow on the light.

Here is part of a poem by Lao Zhu about success and failure which, according to Taoist philosophy, are equally dangerous.

Success is as dangerous as failure.

Hope is as hollow as fear.

What does it mean that success is a dangerous as failure?

Whether you go up the ladder or down it,

your position is shaky.

When you stand with your two feet on the ground,

you will always keep your balance.

Here, Lao Zhu compares success to a ladder. Achieving success,  we find ourselves standing on the rungs of a shaky construct. A gust of wind could blow us over. A tremor in the earth could knock us down. The winds of change–in society or the business climate or our industry–make us vulnerable. We may become unbalanced in other ways such becoming prideful or forgetting to nurture our relationships with loved ones. We may even become unethical in our attempts to gain success or to remain “on top.”

Failure, or climbing down the ladder, makes us vulnerable in different ways. Unhappiness, discouragement, anxiety, self-loathing, negative self-esteem, anger–these are all emotional reactions to failure that can affect our health and well-being.

However, if we live in the moment–on the ground, so to speak–not climbing up or down, we are balanced, solid, mindful. Being on the ground means doing the work, practicing our craft or vocation, being mindful of the present and of the world around us. It means seeing what needs to be done and doing it, not to climb the ladder, but rather to accomplish the work. Hope (for success) or fear (of failure) lose their power when we are mindful of ourselves in the moment.

It is difficult not to wade around in the shallow emotions of hope and fear, but in the end, planning to do a task is more meaningful than wishful or fearful thinking. Which of the following three sentences is most robust?

“I hope I win that writing contest.”

“I’m afraid I’m not going to win that writing contest.”

“I will write this short story and enter it in the writing contest.”

I have to admit this concept is difficult for me because I also believe visualizing can be a powerful tool. The difference, however, between hoping and visualizing is vast. Visualizing is like practicing in your head the tasks you will be doing. It isn’t just dreaming of the outcome, the accolades you will receive, the finished product magically appearing in the world.

It is not enough to hope you will finish that novel, build that business, cook that gourmet meal, or learn to speak that second language. Visualize yourself doing it, sure. Then go out and do it. Which leads us to…

Sometimes we like to fool ourselves into thinking we are doing something when really we are making a half-hearted effort. I think this half-hearted effort is what is meant here by “trying.” If you want to sweep the floor, you wouldn’t simply try to sweep the floor. You’d get out a broom and dustpan and begin sweeping dirt. If you want to write a novel, you sit down and write the novel, you don’t sit down and try to write the novel. It might be a really horrible, bad, silly, or unreadable novel, but you would write it. Trying is nothing. Meaningless.

Now, that’s not even to say a horrible, bad , silly, unreadable novel is a “failure.” Because you aren’t thinking in terms of success and failure anymore! You did not succeed or fail. You wrote a novel. Good for you!

There is another meaning of the word “try,” however, and that is “experiment.” You can try a new recipe, which really means you are experimenting with new ingredients or using a different cooking technique. If the recipe isn’t pleasing, the next time you can try–experiment with– different ingredients or a lower oven temperature. In any case, this kind of trying is still doing. It’s different than saying, “I’m going to try to bake a cake,” getting out all the ingredients and then staring at the bowl instead of breaking a few eggs and stirring in the flour.

We all have our own goals and reasons for wanting to reach those goals. We also live in a world that glorifies success and achievement, often equating success with material wealth, societal status, and physical desirability. On social media, we are bombarded by images that act as scorecards in this game we’ve set up for ourselves, and if we aren’t mindful we can become anxious and depressed when we are tempted to compare our lives with what we see.

In the U.S.A. our very economic and societal system is based on competition. Money is the scorecard. And even though we understand that the richest people are often no happier than the rest of us, we somehow still believe getting rich, famous, and successful will make us happy.

Perhaps once we understand that enjoying and appreciating our lives as they are, creating goals and working toward them while not fretting too much about whether or not we actually get there, and being mindful of our daily tasks–not simply as means to an end, but ends in and of themselves–we can learn to maintain a happier, more creative outlook on life and work.

For further reading on the concept of Wu Wei: